In my last article I talked about Etsy's new default Relevancy search and how it effects your shop, and specifically your titles. This follow up post is to clarify a few things and talk about Etsy's policy change on Tagging (since there still seems to be a lot of confusion on the subject).

To recap: Etsy changed it default search to "relevancy". The important points are that now titles carry more weight in searches than tags, and the beginning of the titles carry more weight in searches. So, your titles need to be accurate descriptive words, but the most important words (that tell us what your item is) need to be at the beginning of the title (first 2 to 3 words).

But that presented a problem, otherwise known as: Etsy's tag "stuffing" rule. If you've been around Etsy for any length of time you know it's not OK to tag "stuff". That's using multiple unrelated words like "beach ocean turquoise" in a single tag. Tags were supposed to be a single word, except for specific 2 word phrases like "sterling silver".

After some thought, Etsy decided to alter it's tagging policies to now allow for "relevant 2 or 3 word phrases" in tags because it is necessary for better relevancy. This now allows you to use the same 2 or 3 word keyword combos that you've used in your titles, also in your tags. You can read more about Etsy's policy change here: http://www.etsy.com/blog/en/2011/policy-update-labeling-items/

You still have to be careful that you are not tag "stuffing". It is still not OK to use "beach ocean turquoise" or "red blue green" as a tag, however you can use some 2 and 3 word phrases that would have previously not been acceptable under the old rules. Just be sure that your 2 or 3 word phrase makes sense in relation to the item you are tagging, and that it is actually a phrase (not unrelated words).

Hopefully that helps to clarify some of the new changes, and you'll all be titling and tagging your way to the top of the relevancy searches.

Thank you SO much Sandie!! You have made this change so much easier!!
~Michele

Wow! You did a great work! Its So much easier! BTW, if you have etsy coupon you can share your coupon at http://etsycouponcode.com

Add a Badge to your Blog 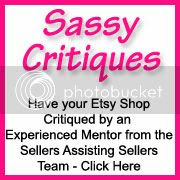